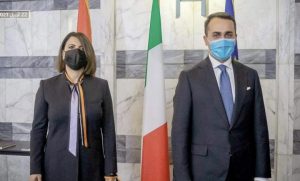 The two sides discussed activating the terms of the 2008 Italian-Libyan Friendship and Partnership Treaty, especially the Joint Committee and the return of Italian companies to implement stalled projects, such as the Ras Jedir-Emsaed coastal motorway, the Tripoli International Airport project, the opening of air space between the two countries, as well as the file of illegal immigration.

At the meeting, Italy announced the appointment of the new Italian consul in Benghazi, who will assume his duties next May.

Mangoush indicated the need to speed up the resumption of the implementation of the stalled projects, and to seek agreement on new projects. She expressed her hope that the airspace between the two countries will be reopened, facilitate the granting of visas to businessmen, and the signing of a future agreement for the extradition of Libyans sentenced in Italy.

As for illegal immigration, the Minister emphasized that Libya is a transit country and that cooperation between Libya and the European Union must be carried out in order to curb illegal migration in light of respect for the human rights of migrants and refugees.

For his part, Italian Foreign Minister Luigi Di Maio affirmed his country’s full readiness to cooperate with the Government of National Unity to support the next stage of the institutional transition and Italy’s commitment to achieving stability in Libya. 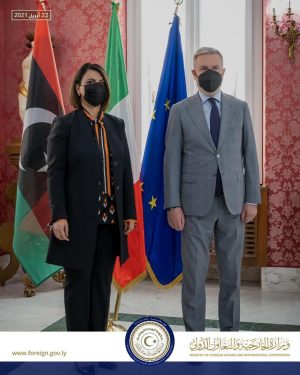 After this meeting, the Minister met with the Italian Defence Minister, Lorenzo Guerrini, and discussed files of joint cooperation represented by the military field hospital in the city of Misrata and the possibility of sending Libyan students studying in military colleges to military academies in Italy.

The Italian side also talked about the support provided by the Italian side in the field of mine clearance and the training of Libyan cadres in this specialization and studying the expansion of this cooperation to include the various regions of Libya.