Aldabaiba vows to visit Benghazi despite entry refusal to his forward security detail – What to do with Hafter? 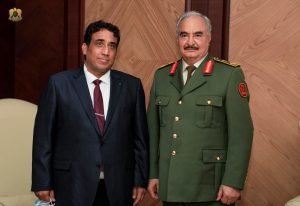 Libya’s Prime minister Abd Alhamid Aldabaiba vowed yesterday to visit Benghazi soon and that he would not let ”minor impediments” stop him and his government. The pledge came during a cabinet meeting during which he read out his government’s achievements in its short time in office.

The comment by Aldabaiba came after a plane carrying his forward security team was prevented from disembarking their plane at Benghazi’s Benina airport Sunday.

In response to the furore caused by the incident, the Khalifa Hafter Libyan National Army (LNA) General Command issued a statement.

It said it refutes what was stated in the ‘‘extremist media, which are abused by hate speech and discord regarding preventing the government from entering Benghazi’’.

It said it affirmed its full readiness to receive high-level delegations and to ensure their security and safety at the highest level.

It welcomed the holding of the government meeting but only ‘‘after coordination with the Ministry of Interior in Benghazi for protection and insurance and not to transfer militia elements from other cities’’.

It added that it ‘‘will not allow the passage of wanted terrorists and militia, and the smuggling of weapons and ammunition under any pretext’’.

It said that it has ‘‘police and regular security services with their expertise supported by trained military units capable of securing any delegation’’.

Adding that ‘‘We welcome holding a cabinet meeting in any of the areas we secure, especially Benghazi’’.

In conclusion, it added that it is ‘‘not linked to the government, whether sovereign, service, or even at the level of communication’’.

After keeping a relatively low profile since the Abd Alhamid Aldabaiba Government of National Unity was granted a vote of confidence by parliament (HoR) on 10 March, Khalifa Hafter resumed his obstructionist role this week by refusing to allow the government’s forward security detail disembarking at Benghazi’s Benina airport.

I am still in control in the east!

Hafter is insisting that ”his” eastern based security forces are up to the job of securing Aldabaiba.

And that if Aldabaiba wants to land in his area of control this can only be done ‘‘after coordination with the Ministry of Interior in Benghazi for protection and insurance and not to transfer militia elements from other cities’’.

He accused the Aldabaiba government of trying to smuggle ‘‘wanted terrorists and militia” and the ”weapons and ammunition under any pretext’’.

Hafter insisted ”he” has ‘‘police and regular security services with their expertise supported by trained military units capable of securing any delegation’’.

Adding that ‘‘he” ”welcome holding a cabinet meeting in any of the areas ”we” secure, especially Benghazi’’.

In otherwise, Hafter did not or no longer recognizes the recent unification of the western and eastern Interior Ministry – but he seems to recognize the civilian Aldabaiba government.

A challenge to the 5+5 Joint Military Commission?

Hafter’s move flies in the face of  his implicit recognition of the 5+5 Joint Military Commission and the good work it has done so far. It could undermine it.

This is the first test for Aldabaiba and the international community. Aldabaiba was adamant yesterday at the cabinet meeting that this was a minor hiccup which would not be allowed to prevent his ‘‘Unity’’ government in governing all of Libya.

The action by Hafter/his supporters is also the first test of the resolve of the international community. They have been very busy since March reeling out the same catchphrases over and over: Constitutionally based elections. Elections by 24 December. Providing desperately needed services to the Libyan people. Complete implementation of the 23 October ceasefire. The 5+5 Commission reopening the coastal road. Security sector reform/reunifying the security forces.

Hafter’s move is a direct challenge to the Libyan Political Dialogue Forum’s (LPDF) Roadmap and Security Council Resolutions backing it and the Aldabaiba government.

What will they do? Will they pressure Hafter’s backers, Russia, UAE and Egypt to reel him in? Will they ask Aldabaiba to dangle some carrots before Hafter? What carrots short of being the supreme commander of an all-Libya army does Hafter want? What can Aldabaiba realistically offer?

Why did Hafter do it?

There are many reasons why Hafter could have made the move.  There are those that say the move was made by juniors without his approval and that once it was a fait accompli his General Command was forced to go with it.

But is may also have been an opportunity for Hafter, who has sat patiently and quietly, to remind Aldabaiba and the international community that he still exists and can affect events on the ground in eastern Libya.

Hafter still has power to obstruct

Hafter was reminding all that he still very much has the power to obstruct. The LPDF and its Roadmap covered many matters, but it did not cover the future political/military role of Hafter.

Hafter wants acknowledgement and reward for his role

Hafter wants a role or what he can see as an honourable settlement or reward. Afterall, it was he and Maetig that bypassed Faiez Serraj and allowed oil production and exports to resume. Being side-lined and overlooked is not what he expected for his out-of-the-box move.

The international community need to come up with an out-of-the-box offer for Hafter to mitigate his potential obstructionist role.