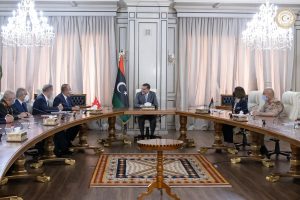 The government reported that the meeting discussed strengthening relations between the two countries and ways to enhance them in the interest of the Libyan and Turkish peoples.

During a joint press conference later between Foreign Minister Mangoush and her Turkish counterpart Mevlut Cavusoglu, Mangoush praised Turkey’s support for the health sector in Libya in the face of the Coronavirus pandemic, and stressed the establishment of distinguished relations with Turkey in the interest of both countries.

She also called on Turkey to cooperate with regard to the implementation of Libya’s internal October ceasefire agreement and the outcomes of the Berlin Conference, including the removal of foreign forces and mercenaries from Libyan lands, in support of Libya’s sovereignty.

For his part, the Turkish Foreign Minister affirmed his country’s support for the Libyan government in order to maintain the security and stability of Libya, and explained that his meeting with Prime Minister Aldabaiba included a discussion about the maritime memorandum of understanding, its terms of reference, and the steps taken towards it in the future.

He also indicated that the talks included the appropriate mechanism for the return of Turkish companies to resume their work in Libya.