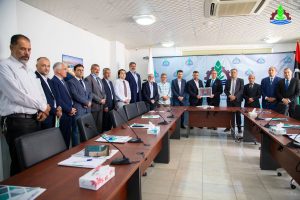 Tunisian ambassador to Libya Asaad Al-Ajili and his delegation visited Misrata Chamber of Commerce yesterday headed by its chairman Mohamed Raied his delegation and a number of local business leaders.

Ambassador Ajili expressed his happiness to visit the city of Misrata in general and the Chamber, especially as it came in the blessed month of Ramadan and stressed the need to establish a new and strong partnership between Libya and Tunisia in the commercial side and work to strengthen the existing companies and open the horizon of cooperation.

The first of these matters is the preparation for the Libyan-Tunisian exhibition later on in May. He also called for an increase in the exchange of visits between the Chambers of Commerce and delegations in the two countries in general and with the Misrata Chamber of Commerce and its members in particular.

A number of the attendees also talked about the most important problems facing merchants and businesses in the two countries, and work to overcome them and facilitate procedures for both parties.