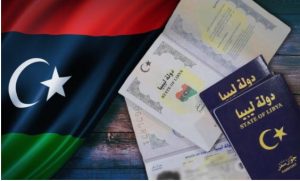 The Libyan Foreign Ministry announced Thursday that it has authorized the installation of passport-issuing systems in several diplomatic missions.

The Ministry said it comes as part of the Libyan government’s efforts to overcome difficulties and provide the best services to Libyan citizens residing abroad in coordination with the Ministry of Interior’s Passports, Nationality and Foreigners Affairs Authority.

It reported that the process of issuing new passports will begin in the coming days.

It explained that the Libyan community of visitors, residents, students and others will be able to submit their requests directly to the Libyan embassies and consulates abroad to issue passports with ease and convenience, saving time and effort.

The installations will be in stages and the first stage will be the installation of systems in the following 13 diplomatic missions:

The Foreign Ministry also emphasized the need to return to work in foreign embassies accredited in Libya and to provide visa-granting services from inside the Libyan territories.

However, it must be kept in mind that over the last decade, successive post-Qaddafi administrations have announced their intention to start issuing passports abroad at multiple missions – without doing so.

The only mission that has succeeded to issue passports abroad on a consistent basis has been the consulate in Marseilles, France.

System launch for Libyan passports to be issued abroad in 22 countries | (libyaherald.com)