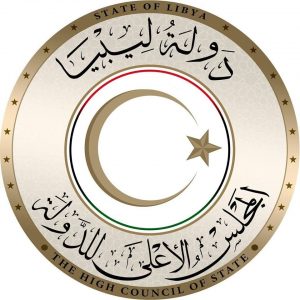 The High State Council (HSC) is pushing back on international pressure to hold elections on time (Logo: HSC).

The High State Council issued a statement expressing its great astonishment at the joint statement issued by the embassies of Germany, Italy, the United Kingdom, France and the United States in Libya, which indicated that the current time is not appropriate to make changes in positions related to preparing for Libya’s 24 December elections.

The HSC said ‘‘This statement is considered an interference in the internal affairs of Libya, and confirms that the violation of Libyan sovereignty does not depend only on the presence of foreign mercenaries on the ground, but is manifested through an attempt to impose foreign political dictates that are categorically rejected’’.

It added that ‘‘While the HSC stresses the necessity of holding elections on the specified date on solid constitutional foundations, it confirms the independence of Libyan decision-making which is an untouchable issue’’.

The statement called on ambassadors of foreign countries not to exceed the limits of their work in accordance with what is stipulated in diplomatic norms, and to respect the laws of the host country with an obligation to do so and not to disrespect them, whatever the pretext.

HSC pushes back on pressure to hold elections on time, withdrawal of Turkish forces and support for Mangoush?

It will be recalled that the above-mentioned states issued a Joint Statement on 6 May as part of their ongoing efforts to pressure Libya’s stakeholders into holding the country’s planned elections on time.

The statement read: ‘‘The embassies of France, Germany, Italy, the UK, and the US recall the fact that UNSCR 2570 called on the relevant Libyan authorities and institutions, including the GNU and House of Representatives, to facilitate the 24 December 2021 elections, and agree the constitutional and legal basis for these elections by 1 July.

In addition to the political and security arrangements, the technical and logistical preparations will be critical. The above-named embassies believe that now is not the time for any disruptive changes at the relevant bodies which enable that preparation to take place within the timescale set by UNSCR 2570.’’

Push back on support for Foreign Minister Mangoush

The HSC could also be reacting to U.S. support for foreign Minister Mangoush who insists on citing the Berlin outcomes and the UNSC Resolution which calls for all foreign forces – including Turkish forces – to leave Libya.

Specifically, Ambassador Norland had said ‘‘We fully support Foreign Minister Mangoush’s unambiguous call for the departure of foreign forces in the interest of Libyan sovereignty and stability.’’

The international community is determined to force Libya’s political ‘‘dinosaurs’’ and ‘‘status quo’’ party’’, which includes the House of Representatives and maybe even the Aldabaiba administration, into holding constitutionally-based elections on time and getting their allies to withdraw their mercenaries and forces.