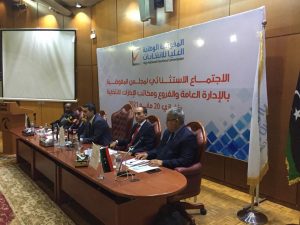 Libya is 70 percent ready to hold its forthcoming elections whilst the outstanding 30 percent is the need to pass legislation including the electoral law.

The revelation was made Thursday by Emad Sayeh the head of Libya’s High National Elections Commission (HNEC) during an extraordinary HNEC meeting in Benghazi that included all regional representatives.

The meeting, which took place at the headquarters of HNEC’s Benghazi office, discussed the final preparations and latest developments for the planned 24 December elections, and the final evaluation of the extent of HNEC’s readiness.

Al-Sayeh said in his speech at the meeting that the level of readiness has reached 70 percent and includes all technical and logistical details and human cadres, while the remaining 30 percent related to the legal part of the elections, pending the issue of the election the law.

The HNEC head also mentioned that the Commission is working with all its cadres on the elections in the best circumstances and with the highest professional standards, stressing the importance of intensifying efforts between the public administration and its offices to overcome all administrative or technical difficulties and bottlenecks.

The attendees also discussed a number of issues related to communication, the availability of logistical capabilities, and the search for the best ways to overcome any obstacles that might arise, valuing the national will gathered among the Libyans to reach the electoral option as a way to stability and societal peace.

More pressure on parliament and HSC

The announcement by Sayeh will be welcomed by those Libyans and the international community who ready do want elections to be held in the country on 24 December.

It puts the ball squarely in the court of the status quo/obstructers/dinosaurs who are secretly trying to scupper the holding of Libyan elections.

Sayeh’s statement absolves both the Libyan government and HNEC from causing any delay of the proposed elections, pointing the finger and putting the blame squarely on the shoulders of parliament (the House of Representatives) and the unelected High State Council – both highly paid.

The statement makes clear to the Libyan public who is holding up the elections process and provides a useful battering ram for UNSMIL and the international community to beat the HoR and HSC – to hasten the electoral process.

LPDF to convene virtually 26-27 May to finalize constitutional basis for 24 December elections | (libyaherald.com)

Acting Assistant Secretary of State for Near Eastern Affairs Joey Hood underscores support for December elections and withdrawal of all foreign forces | (libyaherald.com)

Joint statement by Embassies of France, Germany, Italy, the UK, and the US in Libya supporting Libyan institutions to prepare for elections as scheduled | (libyaherald.com)

Military institution must be reunified before elections: Libyan government | (libyaherald.com)

U.S. continues pressure for 24 December elections and departure of all foreign forces from Libya | (libyaherald.com)

Co-Chairs of the International Follow-up Committee on Libya reiterate priority of constitutionally based 24 December elections | (libyaherald.com)

HNEC follows up on e-voting cards ahead of 24 December elections | (libyaherald.com)