LBC signs MoU with Ukraine Union of Industrialists and Contractors 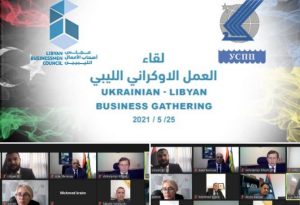 The LBC signed an MoU with its Ukrainian counterpart yesterday (Photo: LBC).

The Libyan Business Council (LBC) revealed yesterday that it had signed a Memorandum of Understanding (MoU) on the same day with the Union of Ukrainian Industrialists and Contractors.

It reported that the MoU paves the way for the establishment of a joint Libyan-Ukrainian Business Council that works to strengthen economic cooperation between the two countries.

The MoU was signed within the activities of yesterday’s virtual Ukrainian-Libyan Business Meeting which was organized in cooperation between the Union of Ukrainian Industrialists and Entrepreneurs, the LBC, and the Libyan Embassy in Ukraine.

The LBC reported that a large number of public and private Ukrainian companies and institutions, and members of the LBC participated, including the Benghazi and Sebha branches of the LBC.

Various presentations were made from both countries regarding the potential to increase bilateral trade. This included Libya’s Export Promotion Centre (LEPC).

The head of the LBC Benghazi branch expressed their willingness to organize a special exhibition for Ukrainian industries in Benghazi, the LBC reported.