A UN report on asset recovery of illicitly obtained Libyan funds says these are costing Libyans dearly by lowering their living standards and possibly destabilizing the country (Photo: UNICRI).

The report explains that IFFs impact a country’s economic and social development in a myriad of ways. Undocumented flights of wealth to and from – as well as within – a country have severe repercussions on government revenues, wealth that could otherwise be invested in public spending and other forms of economic and social reforms. Illicit financial flows, particularly those related to corruption and organized crime, also withdraw funds from the legitimate economy and can limit the state’s ability to invest in healthcare and education, among other public sectors. 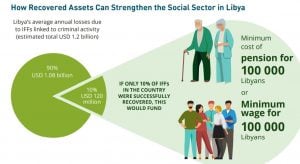 It says IFFs may also undermine economic and political stability in Libya. It is for these reasons that Libya must place significantly higher priority on seizing and confiscating illicitly-obtained assets and channel such recovered assets to high-priority development needs that benefit the Libyan people, it adds.

The study sheds light on the significant damage being caused to Libya as a result of unchecked IFFs, and on the importance of prioritizing the capture of illicitly-obtained assets linked to such IFFs.

“[D]espite Libya’s known wealth in natural resources, access to education, health care, electricity and other essential services remains a problem for a large part of the population. The study on Illicit Financial Flows and Asset Recovery in Libya demonstrates that corruption and criminal activity have a direct impact on the everyday lives of ordinary Libyans. With this study, the European Union aims at outlining a possible roadmap to assist the Government of National Unity and other officials to address this problem and channel recovered funds towards swift improvements in public service delivery,” said Ambassador of the European Union to Libya José Sabadell. 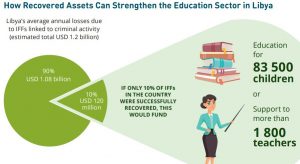 UNICRI’s Director, Antonia Marie De Meo, emphasized that: “This study reveals just how important it is for Libya to improve its mechanisms for the effective and efficient seizure and confiscation of assets linked to acts of corruption, as well as organized criminal activity. We are hopeful that the GNU, House of Representatives and future elected officials will fully adopt and implement the recommendations set out in the study for the benefit of the Libyan people.”

In creating and implementing more effective responses, many of which are proposed in the recommendations of this study, Libya will be able to weaken the influence of corruption and organized crime, as well as inject significantly greater funding into high-priority development needs.

After off camera deliberations, parliament failed to agree 2021 budget. Amended budget reduced to 76 bn – discussions to resume next session