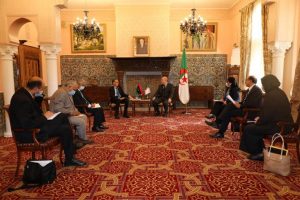 Libya and Algeria seek to activate their economic relations on multiple levels. The sentiment came through during the meeting of Libya’s Minister of Economy and Trade Mohamed Hwej and Algerian Minister of Finance Ayman Bin Abdelrahman last Sunday on the margins of the Algerian Libyan Economic Forum held between 29-31 May in Algiers.

During the meeting, Minister Hwej discussed ways to enhance and raise the level of trade exchange between the two countries and expedite the opening of the land border crossing (Al-Dabdab), which Libya sees as representing an economic zone in the Ghadames area.

They also agreed to work on re-studying, evaluating and updating trade and economic agreements, as well as the double taxation agreement in light of the economic and commercial developments that the world is witnessing, and the conclusion of an indicative memorandum of understanding on it.

The meeting also discussed the mechanism of creating a commercial partnership between the Libyan and Algerian economic actors, activating the role of the private sector in the two countries, working to intensify visits of trade delegations, establishing specialized joint exhibitions, and establishing permanent channels of communication between officials and technical committees to find out any developments in the fields of economy and trade.

At the end of the meeting, it was emphasized the importance of activating the Libyan-Algerian Bank and carrying out its commercial role with the contribution of public and private institutions, and facilitating financial procedures for customers in the two countries.