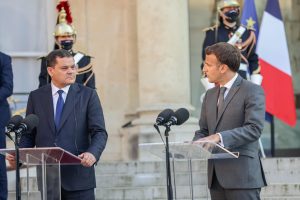 During the joint press conference with Macron, Aldabaiba expressed his happiness at the official return of relations under the government and institutions of a unified state, adding that France has a role in strengthening the Libyan sovereign decision in international forums, especially the upcoming Berlin 2 conference and its outcomes.

He stressed France’s important role in strengthening political legitimacy in Libya and the importance of continuing this role in its support for the extension of national sovereignty, the expulsion of mercenaries, and the unification of the military institution.

Aldabaiba valued the role of France and the European Union in supporting Libya to confront illegal immigration and combat terrorism and organized crime.

For his part, French President Emmanuel Macron affirmed France’s commitment to supporting Libya and its stability, and working with international and regional partners to achieve this.

Macron added that France will support the Libyan Government of National Unity (GNU) in the security aspect and in the implementation of the ceasefire agreement.

He also stressed working with the Libyan government to build a unified army that guarantees the stability of all parts of the country, praising the efforts of the Joint Military Committee in this file.

The French President pointed out that France will support the political process, stressing the ability of the Libyan government to complete the requirements of the stage to organize the elections on schedule.

He added that it is a priority for France and the European Union to support the government to secure land and sea borders, and will cooperate with neighbouring African countries to achieve this.

Macron said that the talks he held with the Prime Minister of the Government of National Unity confirmed their common desire to restore sovereignty, stability and unity in Libya, stressing that France will help Libya in this transitional stage.

On the health front, Macron indicated that a number of French doctors will be sent to Libya as of tomorrow to contribute to the treatment of dozens of children with cancer.

In his role as Defence Minister, Aldabaiba meets Parly

In his role as Defence Minister, Aldabaiba also held a meeting with France’s Armed Forces Minister, Florence Parly, in the presence of Libyan Interior Minister, Khaled Mazen, and the Minister of State for Cabinet Affairs and the Prime Minister, Adel Jumaa.

The meeting also dealt with the resumption of training programmes, some of which were implemented during the past years, and which target employees of the Libyan military establishment.

The Prime Minister and Minister of Defence stressed that Libya’s sovereignty and respect are the basis for its relations with countries, and that the development of relations in the security, economic and political fields with France is a matter of interest for the Government of National Unity.

Aldabaiba also met French Foreign Minister Jean-Yves Le Drian, in the presence of Minister of Foreign Affairs and International Cooperation, Najla Al-Mangoush, Minister of State for Cabinet Affairs and the Prime Minister, Adel Jumaa, and the French Ambassador to Libya.

The meeting discussed joint coordination on the “Berlin 2” conference, as well as the upcoming Security Council sessions headed by France.