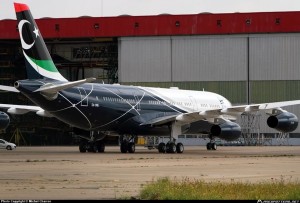 The Airbus 340 at Orly Airport, Paris France awaiting its fate (with acknowledgement to Michel Carron http://michel-charron.pagesperso-orange.fr)

The statement indicated that the aircraft had completed its maintenance, financial and legal obstacles in France and moved on for another phase of maintenance in Istanbul before returning to Libya.

The saga of Qaddafi’s former plane

It will be recalled that the plane had been caught up in a legal tug-of-war between the Kuwaiti Al-Kharafi Construction Group and the Libyan state.

The Kharafi group had been attempting to take ownership of the luxurious plane whilst it was in France for payment of a settlement ordered by a court for the Libyan cancellation of a tourism contract in 2010. The plane had been flown by Libya to the French city of Perpignan for maintenance in 2012.

An arbitration panel in Cairo had ordered Libya in March 2013 to pay nearly a billion dollars to the Kuwaiti company for the loss of 90 years’ potential income from a cancelled Tripoli tourism project.

After a French court had ruled on 25 August 2016 that the Kharafi Group could not use the aircraft for settlement of a court decision decision, they decided to abandon the case.

The A340 Airbus had been bought from Saudi Prince Alwaleed bin Talal for €120 million in 2003. It was damaged during the revolution and was sent to France for repairs and had been there ever since.