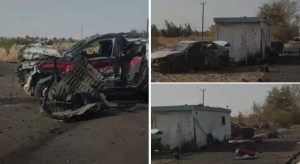 The Director of Sebha Security Directorate Al-Senussi Saleh was quoted by Sebha Council as saying that the vehicle used for the attack was a pickup truck (Canter) carrying a scrap car which it transpired had explosives hidden underneath.

He announced that the bombing of the Mazig checkpoint, north of the city of Sabha and on the road to Brak, was ‘‘a terrorist operation carried out by a suicide bomber’’, and resulted in the death of two employees of the Directorate, and the wounding of four others.