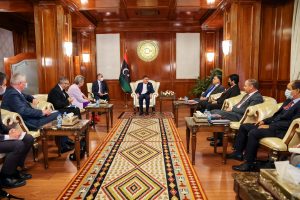 The Libyan government reported that the meeting focused on the issue of illegal immigration and human smuggling, and ways to support the efforts of the Libyan government in confronting this phenomenon. The negative consequences resulting from it, such as the phenomenon of terrorism and trade in organs and people, were also discussed.

Prime Minister Aldabaiba stressed that the Libyan state, being a transit country, will not be able to stop this phenomenon alone, but that the matter needs serious cooperation from the European Union and with the countries of origin.

The attendees also pointed out the need for a real partnership and crisis management, since migration is a sensitive issue that needs various and different treatments, such as the establishment of development projects in the source countries, as well as support for the Libyan authorities with training programmes for members of the Migration Control Agency and the development of the capabilities of the Libyan Coast Guard.

During his separate meeting with Johansson, Interior Minister Mazen re-emphasized that the problem of illegal immigration is not a Libyan problem, but rather an international phenomenon that requires the cooperation of all in order to find solutions to it, explaining the need for a comprehensive approach to combat smugglers and enhance the humanitarian situation.

The Minister added that the overcrowding of the return centres with migrants requires expediting the facilitation of voluntary return and resettlement trips.

Mazen also indicated the size of the large numbers that were rescued at sea this year, reaching 9,216 illegal immigrants, compared to 7,106 immigrants last year.

The Minister called on the European Union to provide support and possible facilities in order to contain this phenomenon.

Posting on her twitter page yesterday, Johansson wrote: ‘‘An open and encouraging discussion with Libyan Prime Minister Aldabaiba and his Government in Tripoli today. We stand ready to support the political process and step up our support to the Government of National Unity on state building, stabilisation, reconstruction and reconciliation.

Concrete and practical steps to manage migration and borders comprehensively are best taken together. And we look forward to stepping up our joint efforts. It remains essential to improve the conditions in detention centres in full respect of human rights. We have at our disposal a variety of instruments we can mobilise at the request of the Libyan Government across a wide range of areas.