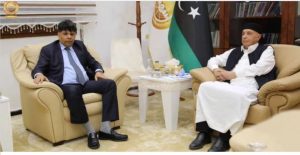 Attorney General, Sideeg Al-Sour, met Ageela Saleh, the head of parliament (the House of Representatives (HoR) at Saleh’s office in Gubba, eastern Libya yesterday to discuss difficulties and problems in the functioning of the judiciary and prosecution offices.

Attorney General Al-Sour was reported by the HoR saying that he discussed with Saleh the difficulties encountered in the functioning of the prosecution service, in particular the issue of legislation, which needs research and consideration.

He explained that there is wordiness in many of the legislations issued by the General National Congress (GNC) and the HoR which were relate to judicial work, but the judiciary and the public prosecution did not have an input in their drafting, which has caused many problems.

Al-Sour said: “There is an expansion in the restrictions that fall on the freedom of the Public Prosecution to initiate criminal proceedings, request and permission for many sectors, and this contradicts the principle of equality before the judiciary and the law.

The Attorney General explained that all the issues that were discussed with Saleh received a full response, cooperation and acceptance of all views, and that all of this would eventually lead to an improvement in the level of performance.