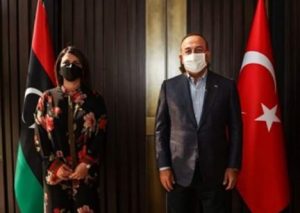 The statement was made by Mangoush during her informal working breakfast meeting with Turkish Minister of Foreign Affairs Mevlut Cavusoglu in Turkey.

The Libyan Foreign Ministry reported that the two reviewed the common issues between the two countries that were addressed by the visits of the two parties during the past period, in order to determine their rapid implementation.

The two sides discussed the two countries’ preparations for the second Berlin Conference to be held in the coming weeks and how to unify efforts towards implementing the roadmap for the preliminary stage and achieving stability.

For his part, the Turkish minister reiterated his country’s full support for Libya and the efforts of the Government of National Unity to achieve stability at all levels.

The two ministers also agreed to continue joint coordination between the two countries before the conference, where the Turkish Foreign Minister confirmed that he will visit Libya next week to complete consultation and coordination in a way that achieves the desired goals from Berlin 2.

Withdrawal of foreign forces and mercenaries and reunification of key Libyan institutions focus of the Berlin 2 conference: UN Spokesperson | (libyaherald.com)