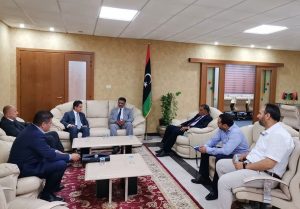 GE is ready to offer its full support to GECOL (Photo: GECOL).

U.S. energy giant GE expressed its full readiness to support the General Electricity Company of Libya (GECOL) and stand with it in overcoming all the difficulties it faces, GECOL reported Wednesday.

The two sides discussed aspects of cooperation between the two companies, especially in the field of maintenance of power stations.