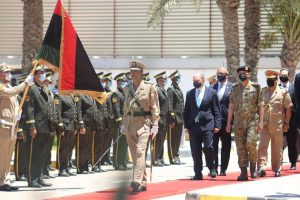 In the presence of the commanders of the military regions, chiefs of the specific staff, members of the Military Committee 5 + 5 prospects for future military cooperation between the two countries were discussed, the Chief of Staffs reported.

Defence Minister Wallace stressed the provision of military support in various fields and that work is underway to coordinate in various training programmes, the short Chiefs of Staff report said.