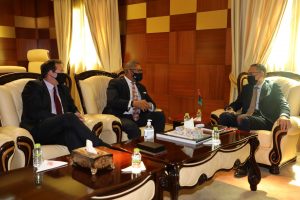 Britain is ready to provide strategic support in renewable energies, free zones and transit trade, the Libyan Ministry of Economy and Trade reported James Cleverly, British Minister of State for the Middle East and North Africa, as saying.

This came after Cleverly’s meeting Wednesday with Libya’s Minister of Economy and Trade Mohamed Hwej in Tripoli. Nicholas Hopton, the British Ambassador to Libya was also present. On the Libyan side the meeting included the Chairman the General Electricity Company of Libya (GECOL) and the Chairman of the Renewable Energy Authority of Libya (REAoL).

Minister Hwej stressed the historical Libyan-British relations, expressing the keenness of his government to open new horizons and establish a long-term partnership with the British government. This includes the participation of British economic and scientific institutions by providing technical advice on economic diversification for non-oil sectors and increase the size of their contribution to GDP.

The Minister of Economy and Trade urged the British side to support international efforts to open the airspace to airlines in the European Union countries and the UK and all Libya’s trading partners.

He noted that this step enhances communication between economic and commercial activities in the UK and countries of the European Union, which contributes to increasing the volume of trade and investment towards the markets of Africa and the region and the Mediterranean Sea. This would support Libya’s in dealing with the migration file through the settlement of development projects in southern Libya that would be a development line expelling migration. He also requested the facilitation of British visa procedures for Libyans.

For his part, the British Minister of State expressed the British government’s desire to start a new phase of bilateral cooperation with the State of Libya in the fields of development, economy and investment. He also expressed his country’s readiness to provide technical and advisory support for the implementation of strategic projects, especially in the fields of renewable energies, free zones and transit trade, noting that the State of Libya has promising opportunities for investment and orientation towards stability and economic prosperity.

At the end of the meeting, the two sides stressed the importance of continuing bilateral meetings and preparing memoranda of understanding in the fields of economy, trade and investment in the framework of strengthening trade and economic cooperation between the two countries.