Ahead of Berlin 2: A high level Turkish delegation visits Tripoli 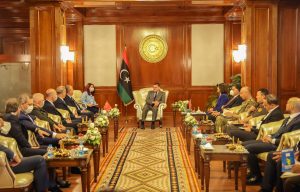 The Libyan government reported that the two sides held consultations on the upcoming Berlin 2 conference, and discussed the latest developments on the memoranda of understanding and agreements concluded at the meeting of the Libyan-Turkish Supreme Council for Strategic Cooperation and ways to put them into practice.

On the other hand, the two sides discussed joint training programmes in the security and military fields, where the Turkish side expressed its willingness to provide its expertise and technical support in the field of elections.