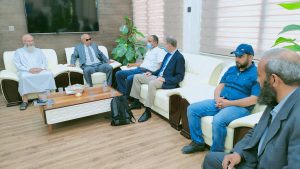 The Municipality reported that the meeting came at the invitation of the Minister of Water Resources, Tarek Bouflika, to provide all possibilities of support for this important project to maintain the station and provide drinking water.

The meeting discussed studying the conduct of a major overhaul, the rescheduling of orders and the priorities of spare parts according to the current status of the plant and assessing and determining the financial value required to perform the overhaul.