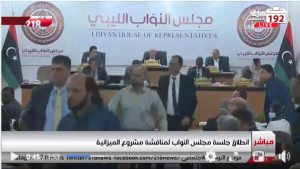 Yesterday’s House of Representatives (HoR) session in Tobruk set to discuss the draft 2021 budget and Sovereign Positions was suspended abruptly after an argument between two members turned into a fight.

The two members held opposing views on the presence of Turkish forces in Libya and one could be heard taunting the other by saying ”Whoever is Turkish in the House stand up”. The cameras did not show the two members tussling but other members were seen rushing to break them up and HoR head Ageela Saleh could be heard ordering live transmission to be stopped.

HoR Official Spokesperson Abdalla Belheeg made absolutely no reference to the incident, simply saying ‘‘the session of the House of Representatives for today has been suspended until tomorrow, Tuesday.’’

However, the incident transmitted live, drew much social media comment and criticism. Critics felt their representatives were not up to the role and unfit to represent them. They linked their behaviour to the HoR’s ineffectiveness ever since it was elected in 2014.