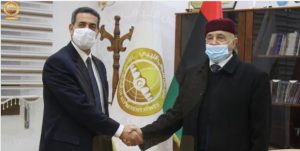 The head of the House of Representatives, Ageela Saleh, met in his office in the eastern city of al-Gubba today, the head of the High National Election Commission, Emad al-Sayeh.

During the meeting, Saleh affirmed his rejection of any attempts aimed at obstructing and postponing the elections beyond the date set for the 24 of December of this year, and the need to work to fulfil this electoral entitlement on time.

Saleh also stressed the need not to confiscate the right of the Libyan people to choose the president directly in free, fair and transparent elections.

For his part, the head of HNEC, Emad Al-Sayeh, stressed during the meeting the readiness of HNEC in technical terms to organize the elections on the scheduled date of 24 December 2021.