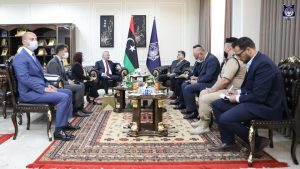 In a short statement, the Ministry reported that several important issues were discussed during the meeting, including:

The Turkish embassy’s report of the meeting, on the other hand, said they discussed the follow-up to the topics that were addressed during the visit of Turkey’s high-level delegation to Tripoli on 12 June, which also included Turkish Minister of Interior, and ‘‘the opportunities to transfer  bilateral cooperation in the security field to more advanced levels.’’