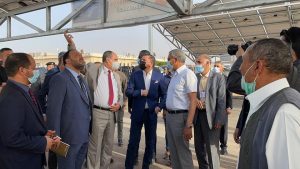 Private sector Alhandasya company implemented the project at the CSERS. The project is funded by the Libyan government.

The Prime Minister discussed the technical aspects of the project and expressed his admiration for this achievement as a model for applying solar energy in Libya, where the concentration of sunshine hours is among the highest in the world, Alhandasya reported.

The solar power project will be connected to the national grid producing 62 KW. The solar panels were designed in such a manner that the area underneath them will be utilized as a car park, Alhandasya’s Chairman Elmabrouk Saleh explained.

The project site was also visited by Germany’s Ambassador to Tripoli, Oliver Owcza, as a guest of Alhandasya. Alhandasya reported that the Ambassador welcomed the efforts made by the company, the work team and the company’s advisors through a constructive and fruitful meeting for the sake of future generations.

Saleh revealed that the visit of the German ambassador and the embassy team came within the framework of reviewing the Alhandasya’s efforts to support the local energy sector, which is one of the outcomes of the Berlin Libya Economic Conference which Alhandasya participated last year.

It was in light of the Berlin Libya Economic Conference that the Libyan-German economic conference was held last March in Tripoli, in the presence of the Libyan government, the private sector and German companies that started their business in Libya – based on the outputs of the Berlin Conference, Saleh explained.