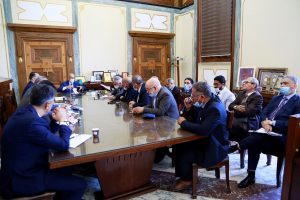 Saddek El-Kaber, Governor of the Central Bank of Libya (CBL), met on Wednesday at his office with the President and members of the Libyan Private Clinics Union. The meeting included several directors of departments and consultants at the CBL and several managers of commercial banks.

The CBL reported that the meeting focused on supporting the vision of the government to move the wheel of the economy and the contribution of private clinics to that.

It explained that the aim is for the private Libyan health sector to develop in partnership and cooperation with commercial banks. This, the CBL said, would be in accordance with the approved relevant quality controls and according to the conclusions of the first conference of the Libyan Private Clinics Union.

It will be recalled that the Libyan Private Clinics Union held a conference on 12 June at which Prime Minister Abd Alhamid Aldabaiba spoke and was attended by the CBL Governor.

During his speech at the event, Aldabaiba had highlighted the need for real partnership between the public and private sectors in the health field and a need to develop an effective vision for the health insurance project.

He had stressed the need for the activation of the banking sector in supporting the private health sector through investment – after the classification of clinics by the Ministry of Health.

The Prime Minister had said that Libya needs to organize and monitor the private sector in a way that helps in performing its tasks to provide services of the highest quality.

He had called for the development of the private health sector and access to high levels of quality, so that it can provide the needed health services in a way that prevents Libya from spending millions of dollars on treatment abroad.