Free, economic and logistics zones, and transit trade to be activated in south 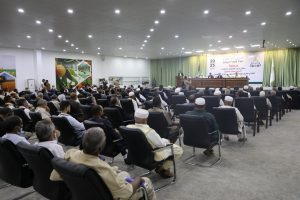 Free economic and logistics zones and transit trade to be activated in south (Photo: Economy Minister).

Inaugurating the Libya Exhibition for Food, Preservation and Packaging Supplies yesterday at the Fairgrounds in Tamenhint, south Libya, the Minister of Economy and Trade, Mohamed Hwej announced the need to establish and activate free zones and transit trade that contribute to creating major investment opportunities in the south.

The food exhibition will run from 20-25 June and included the participation of a number of factories, local companies, farmers and citizens who own small and medium enterprises, displaying agricultural and industrial products in addition to traditional industries and handicrafts.

The Minister stressed the need to work according to an organized mechanism between the various sectors to improve the level of services in the region, activate stalled companies and factories, establish other projects based on raw materials that abound in the south of Libya – all as part of the government’s efforts to achieve spatial development and economic diversification.

The exhibition also included the laying of the foundation stone for the establishment of the Southern Economic Zone in Tamenhint, which includes free, industrial, logistical and technical zones for oil fields. The economic zone will include a free trade zone, which aims to create an international trade platform that would be a gateway to Africa. It also aims to change the economic formula in the region, diversifying activity and creating direct and indirect jobs.

Privatization and Investment Board

On the side-lines of the exhibition, the Fezzan Economic Salon was organized, where a visual presentation was made by the southern branch of the Privatization and Investment Board on the real and promising investment opportunities in the region. The presentation also included the challenges and obstacles the region faces, ways to overcome them, and the mechanism of employing these opportunities and exploiting them in economic development in the south. It also included the agricultural sector plan to activate the local agricultural departments and support farmers to raise the level and quality of production.