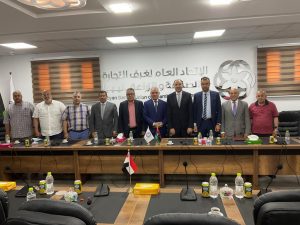 The Chairman of the Libyan General Union of Chambers of Commerce, Industry and Agriculture, Mohamed Al-Raeid, received the Egyptian Ambassador to Libya, Mohamed Selim yesterday.

In a meeting held at the Chamber’s Tripoli headquarters, the two parties discussed activating the Libyan-Egyptian agreements related to facilitating the movement of citizens, goods and merchandise, in addition to the procedures for residence and ownership between the two countries.

The two parties stressed the importance of encouraging trade exchange and joint investment, in addition to opening airlines and sea lines between the two countries, and cancelling all fees imposed on Libyan citizens at border crossings.