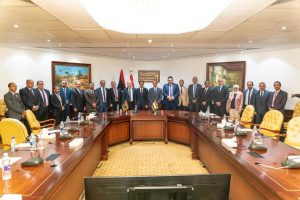 Contracts were signed to expand the capacities and develop the interconnection of the land and sea fibre optic cable system between Libya and Egypt, as well as a training programme to raise the efficiency of the personnel working in the telecommunications sector in Libya, the Libyan Post and Telecommunications Information Company (LPTIC) reported yesterday. LPTIC is the Libyan state monopoly holding company that owns all of Libya’s ITC companies.

The signing came within the framework of the official three visit by the Libyan delegation to Egypt headed by Faisal Gergab, Chairman of LPTIC with Amr Talaat, Egypt’s Minister of Communications and Technology.

The agreements signed between the LPTIC and Telecom Egypt included several areas, most notably: training and capacity development, by benefiting from expertise and technology in the State of Egypt through cooperation with the Information Technology Institute of the Egyptian Ministry of Communications and Information Technology.

There was also an agreement in the field of interconnection between the two countries and making available the Egyptian and Libyan international marine cables for the benefit of both sides, which in turn will deepen the strategic dimension of the two countries.

Gergab said that the agreements signed between the two countries are considered an important event in the history of Libyan-Egyptian relations. He said: “It was agreed to establish a Libyan-Egyptian company to develop the necessary initiatives for digital transformation in Libya, and to lay the foundations for Libyan-Egyptian investment programmes in the field of industry and technology localization.

Smart cities in Tripoli and Benghazi

The Chairman of the LPTIC revealed that it was agreed with the Egyptian side to establish a smart city in the cities of Tripoli and Benghazi, stressing that the start of implementing this plan will begin during the current year.

On his part, Egyptian Minister Talaat said “These agreements confirm that we are at the gates of an important stage of the effective and real partnership that the two countries are witnessing.” He pointed out that the next stage will witness many discussions to implement these signed agreements.

It was also agreed to study the establishment of an integrated factory for the optical fibre industry, in addition to the need to localize the industry and research and development in this aspect. This is due to the existence of promising projects in the two countries, which will provide an opportunity for the private sector to contribute and benefit from it in the local and regional markets.