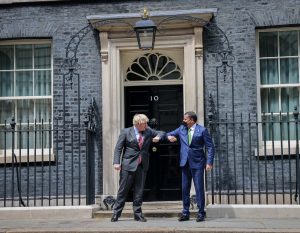 They discussed the ongoing security concerns in Libya, including the destabilising presence of foreign fighters, and the importance of making progress towards holding national elections in December.

Johnson welcomed the upcoming opening of the Libyan National Oil Corporation’s European hub in London and they resolved to boost trade and investment between our two countries.

Both leaders also celebrated the return of an ancient Greek statue of the goddess Persephone, which had been looted from Libya and was recovered with the support of the UK Government.

Finally, Johnson encouraged Libya to ratify the Paris Agreement and hoped that Libya would attend the COP26 climate summit in Glasgow, Scotland this November.