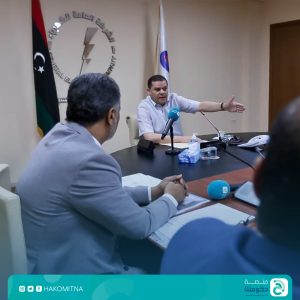 With summer temperatures rising to the late 30’s and 40’s across Libya over the last two weeks, demand for electricity to operate air conditions has sky-rocketed – in tandem with lengthening power cuts.

The increased power cuts has led to increased criticism of Prime Minister Abd Alhamid Aldabaiba and the chairman of the state General Electricity Company of Libya (GECOL), Wiam Al-Abdali.

And as the Prime Minister posed before the newly arrived former Qaddafi Presidential plane and posed with world leaders in Berlin, London and Rabat (Morocco), many Libyans used social media to vent their anger with Aldabaiba. This came in the form of abuse and various memes related to power cuts and high temperatures.

Aldabaiba, it will be recalled, had vowed to resolve the power cuts crisis upon taking up office. He therefore, upon his return from Rabat, called for an urgent meeting with Al-Abdali and the GECOL leadership. A clip of his meeting was released showing him warning GECOL that while he will support them he expected them to keep to their promise to reduce power cuts.

He said he would not be abused by the public for them.

In response, Al-Abdali took to the airwaves in at least two prominent presentations setting out GECOL’s view of the current electricity situation.

Here is a summary of his presentations: