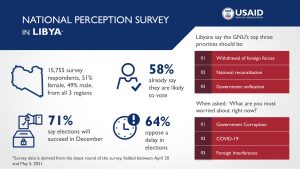 The Embassy said this week, Libyan representatives will join the international community at Berlin 2 to advance tangible progress toward national elections and restoring Libyan sovereignty.

The survey results showed that nearly 60 percent of Libyans plan to vote in national elections; 70 percent were optimistic about successful December elections; and two-thirds reject postponing elections past 2021. The Embassy said Libyans’ desire to elect their next government is truly national.

The U.S. Embassy called on Berlin 2 delegates and Libyan representatives to make firm commitments paving the way for Libyan sovereignty and historic elections in December. Visible progress requires national unity and the removal of foreign forces, the Embassy concluded.