Unification of Libya’s army before elections discussed in top meeting 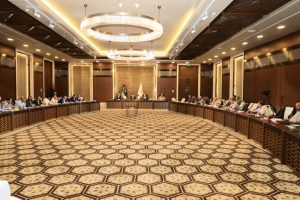 Presidency Council member, Abdalla Al-Lafi, in his capacity as the Supreme Commander of the Libyan Army, participated yesterday in the Forum of the Defence and National Security Committee in the House of Representatives (HoR) with military leaders of the army.

The meeting included the First Deputy head of the HoR, some HoR members, Commanders of the Military Regions, and the 5+5 Committee.

The meeting aimed ‘‘to develop a vision to unify and organize the military institution’’.

In his speech during the meeting, Al-Lafi expressed his hope that the Forum would come out with recommendations that meet the needs of the current stage, with the aim of unifying the military institution to ensure that the elections are held on time according to the vision of the Presidential Council, including the exit of mercenaries and foreign forces from all Libyan soil.