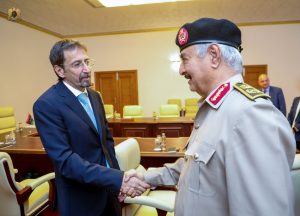 Officially, his arrival was a very low-profile affair. The Italian embassy in Tripoli has made no official announcement.

It will be recalled that Batori was supposed to arrive in Benghazi on 26 May for the Consulate opening. However, the Italian embassy reported that he had tested positive for Coronavirus in control tests conducted in the run-up to his departure to Benghazi.

His departure was supposed to be ‘‘postponed for a few days’’, the Embassy had explained.