Due to prevalence of Indian variant, Libya closes borders with Tunisia for a week from midnight yesterday – universities closed until after Eid 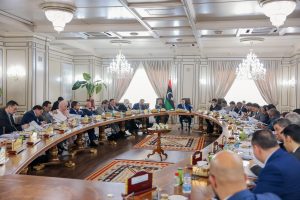 The Libyan government has closed all borders with Tunisia for a week due to prevalence of Indian variant (Photo: GNU).

Due to the prevalence of the Indian/Delta Coronavirus variant in Tunisia and ‘‘the announcement by the Tunisian Ministry of Health of the collapse of the health system’’ in Tunisia, the Libyan government announced yesterday that it is closing its borders with its neighbour for a week starting from midnight last night.

The decision was made at yesterday’s (Fourth Regular) cabinet meeting.

The government said that through its consulate in Tunisia, it will take care of nationals stranded in Tunisian as a result of this decision until their return to the country is facilitated, and it will give further detail updates through various government communication channels.

As a precautionary measure, cabinet also decided to stop studies at universities and colleges until after the Eid Al-Adha.

A batch of 100,000 doses of Sputnik V vaccines arrive in Tripoli | (libyaherald.com)