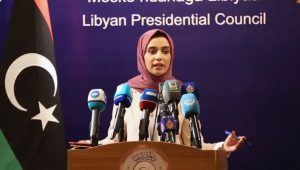 The Constitutional basis for the 24 December 2021 elections

The Presidency Council (PC) said it hoped that the House of Representatives (HoR) and the High State Council (HSC) will agree on of one of the proposals for the constitutional basis to hold the 24 December 2021 elections on time.

The statement came through the Presidency Council’s Spokesperson Najwa Wheba during a press conference held in Tripoli yesterday.

Wheba stressed that the HSC and the HoR are the two bodies authorized to issue a constitutional rule, and therefore the PC hopes that they will agree on one quickly.

Responding to media questions about Deputy PC head Musa Al-Koni’s proposal on BBC Arabic that the PC could issue a constitutional rule to hold elections if all the other bodies fail to do so, Wheba said this was a last option.

Wheba said the PC prefers that the Libyan Political Dialogue Forum handle the constitutional rule file in accordance with the UN Road Map.

On the independent audit report of the Central Libyan Bank (CBL), Wheba said that both CBL Governor El-Kaber and his Deputy Hibri responded well to the report, expressing their readiness to act on its observations, and their agreement to hold meetings for the entire management of the bank.

Appointment of Defence Minister and his Deputies

She said the PC is insisting on appointing a Minister of Defence as soon as possible because this is part of its efforts to unify the military institution.

Wheba announced that the PC had issued a decision on Monday to cancel the decision of the Ministry of Foreign Affairs to appoint advisers in embassies, in order to preserve national unity and the professional bases for appointment to such positions.