500,000 doses of one-shot Sputnik Light expected by the end of the week 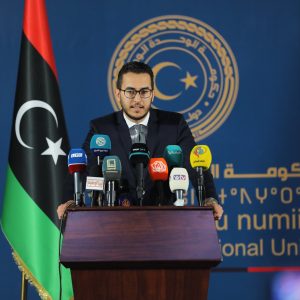 Libya is to receive 500,000 doses of the one-shot only Sputnik Light by the end of the week, government Official Spokesperson Mohamed Hamuda said today at a press conference.

He said the new Sputnik Light also has the advantage of being able to be stored at between 8-2 degrees which is more convenient for many outlying and small health centres in the country.

He confirmed that around 450,000 people have been vaccinated so far with around 800,000 registered on the official Health Ministry website waiting for their turn.

Meanwhile, leading the joint press conference, Health Minister Ali Zanati said that while there have been increased numbers of Coronavirus infections, and the virus seems to be spreading at a faster rate, there have been less cases of deaths and hospitalizations.

He announced that the Ministry will be conducting intensive campaigns in the hotspots as of Thursday and asked Libyans to socially distance over the coming Eid holidays.