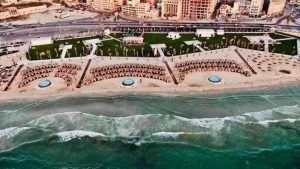 A day after the PM opened it, the Environment Ministry said the newly refurbished central Tripoli Lido (Sinbad) resort has polluted sea water and the public should not swim in it (Social media).

The Ministry of Environment yesterday banned swimming in the newly opened central Tripoli Lido resort due to its polluted water. The announcement comes a day after Prime Minister Abd Alhamid Aldabaiba had made a high-profile visit to the former Sinbad resort.

In a statement, Minister of Environment Ibrahim Al-Arbi Mounir stressed the need to prevent swimming on the Lido resort’s beaches, which he said suffers from pollution due to the presence of sewage estuaries emptying on the beach without going through the treatment stages. He also cautioned the resort on the absence of signs warning visitors not to swim.

The minister also stressed the need to find solutions for sewage water and its treatment.

The Ministry reported that the resort confirmed its desire to implement the instructions of the Minister of Environment.

PR own goal by PM Aldabaiba

The statement by the Minister comes after his visit to the resort on Tuesday morning to see the environmental conditions there. This followed a social media outcry after Prime Minister Aldabaiba, opened the Lido resort on Monday with photographs and video clips showing gatherings at the opening and surrounding him.

His visit also led to the publication on social media of aerial photographs documenting the long well-known fact that sewage outlets were emptying their contents near the resort.

The social media derision and mockery aimed at the Aldabaiba were also fuelled by the fact that he had just announced a lockdown, closing cafes, restaurants events halls, etc, to prevent mass gatherings – the type of mass gathering which the Prime Minister participated in at the Lido.

The ire of the general public was also increased by the fact that during the Qaddafi-era and beyond, the then Sinbad resort was a public resort charging minimal nominal entry fees. Now the new entity that has spent hundreds of thousands on it are charging middle-class rate entry fees. Social media critics questioned how a resort that was accessible for all has become a resort for the high earning elite.