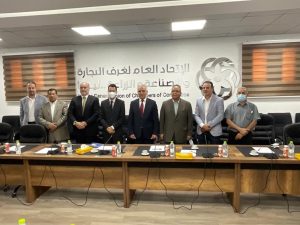 The Ministry of Economy and Trade discussed with the German Chargé d’Affaires the resumption of work by German companies in Libya.

The discussion came during a meeting yesterday between the Director of the Office of the Ministry of Economy and Trade Affairs, the German Chargé d’Affaires and head of the General Union of Chambers of Commerce Mohamed Raied at the Chamber’s Tripoli office.

The Ministry reported that the parties discussed ways to enhance cooperation between the two countries in the fields of trade and investment, organizing a joint economic forum that includes economic activities in the private sector and the possibility of implementing German visas from Tripoli.

The Ministry confirmed the recommendations of the Minister of Economy regarding providing all facilities for the benefit of German companies and encouraging the private sector to implement investment projects in Libya and to establishing branches and agencies in all regions under Libyan management and implementation.