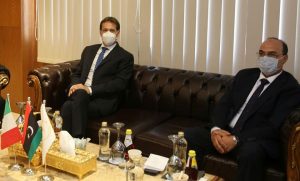 The Municipality reported that Batori expressed his happiness at being in the city and that the two discussed: