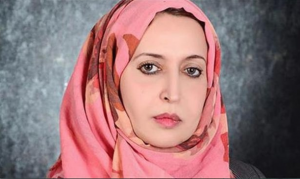 On the two-year anniversary of her violent abduction in her home town of Benghazi, UNSMIL renews its calls for an investigation into Siham Sirgiwa (Photo: Social Media)

Saturday 17 July marked two years since the violent abduction and enforced disappearance of Member of Parliament (House of Representatives – HoR), Siham Sirgiwa, from her home in Benghazi.

On Saturday, UNSMIL renewed its calls on national authorities ‘‘to conduct a thorough investigation into this matter to establish her fate and whereabouts and to bring the perpetrators to justice.

Abduction and enforced disappearance of Siham Sirgiwa, as well as hundreds of individuals, constitute a serious violation of Libya’s obligations under international humanitarian and human rights law.’’, UNSMIL said in its statement.