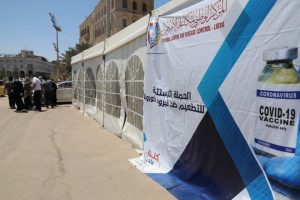 An extraordinary vaccination campaign was launched in Tripoli on Saturday and a partial curfew was announced on Sunday in yet-to-be announced hot spots (Photo: NCDC).

The Libyan government announced a partial curfew yesterday from 6pm to 6 am but left it to the Health Ministry to nominate on health grounds in which cities or towns it will be imposed.

The decision has sown confusion with the Health Ministry saying it is not within its competencies to announce curfews, but to give medical advice on when curfews should be imposed – by the government.

The Health Ministry did, however, request on Saturday the declaration of a health emergency in the country, to activate the mechanisms to combat the epidemic in accordance with the law.

The curfew decision was announced by prime minister Abd Alhamid Aldabaiba during the government’s first cabinet meeting (the fifth of the year) to be held in Sebha yesterday, and comes on the back of rising rates of Coronavirus infections.

The curfew announcement also followed on from the launch of the extraordinary vaccination campaign on Saturday against the Coronavirus in the major municipalities of Tripoli. The campaign had started previously in other coastal cities such as Misrata that were experiencing increased rates of infections.

Speaking at the Sebha cabinet meeting, Health Minister Ali Zanati revealed that out of the total 1,281,052 vaccines received by Libya, only 40 percent (530,808) had been administered to patients. He said over a million other doses are expected from four different suppliers – but gave no dates.

Over 900,000 Libyans had registered for vaccinations on the online system, but only 4,700 non-citizens.

The latest Coronavirus cases and vaccinations