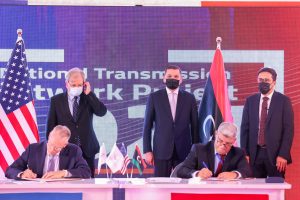 Libyan Prime Minister Abd Alhamid Aldabaiba oversaw the signing of what the government called ‘‘a pioneering agreement’’ between the state-owned telephone company, Hatif Libya, and American company Infinera. The agreement is for the upgrade the country’s fibre optic network.

The Libyan government said the agreement aims is to help deliver mobile and internet services to areas not reached previously and to improve the quality of services to customers so that they can rely on the network to perform with high efficiency.

‎Present at the signing ceremony were also U.S. Special Envoy and Ambassador to Libya, Richard Norland, and the U.S, Assistant Under Secretary of the Treasury, Eric Mayer.

Prime Minister Aldabaiba said the signing of the agreement is a strong step in advancing Libyan American economic relations, as it enhances confidence that Libya are on the right path towards integrating state institutions to provide digital services to all, through which citizens have equal opportunities.

On the other hand, the Libyan government reported Special Envoy and US Ambassador to Libya, Norland as saying on the signing of this agreement that the United States will continue to be a major supporter of Libya in all fields and seeks to be a strong economic partner, and we see that Libya is preparing to receive business, including American ones, due to political stability and the political process. We stand by the Libyan people seeking democracy, prosperity and a stable future.