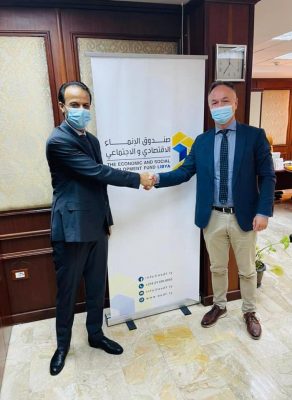 The ESDF wants to start pharmaceutical production in Libya through its investment through Bosnian pharma company Bosnalijek (Photo: ESDF).

Libya’s Economic and Social Development Fund (ESDF) is following up on its plans to manufacture pharmaceuticals in Libya through its investment in the Bosnian Pharmaceutical Industry Company, Bosnalijek.

The news came after yesterday’s meeting at the ESDF’s Tripoli headquarters between the Chairman of the ESDF, Mahmoud Abdel-Salam Al-Washahi, and Bosnalijek’s Regional Director for the Middle East, North Africa and Turkey, Ekrem Turajlić.

The ESDF may increase its investment in Bosnalijek (Logo: Bosnalijek).

The ESDF reported that the meeting focused on completing what was agreed upon during Bosnalijek’s General Assembly meetings held in Bosnia in May this year, which the Fund actively attended, namely, cooperation between the ESDF and Bosnalijek to enter the Libyan market in the field of manufacturing medicines and good supplies through the ESDF’s subsidiaries.

The meeting also touched upon the discussion of increasing the ESDF’s investment in Bosnalijek due to its successes in recent years.

The ESDF reported that Bosnalijek is considered one of the companies in which it has invested in for some time, and which has excelled in the manufacturing medicines and medical supplies until it became one of the largest pharmaceutical companies in Bosnia.