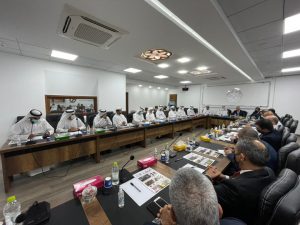 The head of the Libyan General Union of Chambers of Commerce, Mohamed Al-Raeid, received at the Chamber’s Tripoli headquarters a high-level Emirati business delegation yesterday.

The delegation included more than ten of the largest Emirati companies and was headed by Abdullah Sultan Al Owais, Vice-President of the Federation of Emirates Chambers and the Secretary-General of the Federation, Hamid Muhammad bin Salem.

The Emirati delegation was also received by Jamal Al-Lamoushi, head of the Privatization and Investment Board (PIB), Khaled Swesi, Undersecretary of the Ministry of Transportation, Omar Al-Jawashi, head of the Ports Authority, and many managers of Libyan companies, banks and institutions.

This Chamber reported that meeting was characterized by readiness for joint action for the sake of the two countries’ interests and increasing cooperation in all commercial and investment activities.

A Memorandum of Understanding was also signed between the two General Chambers, the most prominent articles of which were: