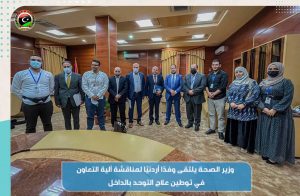 Libya’s Health Minister Ali Al-Zanati met a Jordanian delegation, representing the Jordanian Academy of Autism, to discuss a cooperation mechanism with the Jordanian side regarding the localization of the treatment of autism in Libya.

The Health Ministry reported that during the meeting, a mechanism for cooperation was determined through a service purchase contract to technically support the National Centre for Diagnosing and Treating Autistic Children, and to train and transfer Jordanian expertise to national medical personnel internally and externally, especially in fields and specializations that do not exist in Libya.

The Minister of Health stressed the need to localize treatment inside, because of its important role in the localization of expertise, science and service.

The Minister also stressed the need to open other branches of the centre in the eastern, central and southern regions of Libya.

The Ministry highlighted the fact that the Jordanian delegation had visited the National Centre for the Treatment and Diagnosis of Autistic Children before the meeting, and expressed its admiration for the extent of the centre’s largeness and its being equipped with modern equipment that conforms to international standards.