Libya’s parliament and government are falling out: Analysis 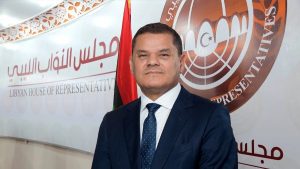 The announcement that there was to be no parliamentary session discussing any topic this week send a further signal that relations between the Abd Alhamid Aldabaiba Government of National Unity (GNU) and the HoR has fast unravelled.

The sense of harmony, unity and positive outlook to the 24 December 2021 elections that came across in March this year when the HoR endorsed the GNU seems to be dissipating.

Parliament and the government are falling out

There were hints in the interview HoR head Ageela Saleh gave to Russian media, if we needed anymore hints, that the dynamic with the government has changed for the worse.

Saleh had accused the government of failing to unify the country’s institutions and that the unification of these institutions means the participation of all regions in power from ministers to embassies to investment companies. He said the government focused management in one place and increased centralization.

The budget is ancillary?

Moreover, Saleh made it clear that the Aldabaiba government did not need the 2021 budget to be passed by parliament as it was able to continue to run the country under existing legislation spending one-twelfth of last year’s budget (some argue one-twelfth of its proposed budget) per month.

Saleh made it clear the government only needs a budget to be passed by parliament to give it legal cover for its spending.

This lack of urgency by the HoR to hold a session to discuss the 2021 budget – at the end of August – underscores the fact that the government is happy to carry on its business – irrespective of budgetary approval by Libya’s parliament.

The government does not want a restrictive, accountable budget?

Indeed, there is a view now by Libyan analysts that the government prefers to operate without a budget. A budget would force it to categorise its spending and keep to this whilst operating without a budget Aldabaiba can spend where he wants and how he wants – within the maximum amount the Tripoli-based Central Bank of Libya (CBL) grants him.

Cynics say Aldabaiba inflated his proposed budget in the face of HoR’s demand that he reduces it – exactly so that the HoR could reject it.

Moreover, the sacrosanct state-sector salaries section of the budget never stops being disbursed as long as the Tripoli-based CBL is happy to handover oil revenues to the Finance Ministry in Tripoli.

The whole episode underscores once again the centralization of Libya’s power and decision-making in Tripoli. Tripoli is where the CBL, the National Oil Corporation, the Audit Bureau and the government lie. These four power houses can continue to function regardless of Libya’s parliament in Tobruk. They did so for the period 2014 to the start of 2021 when Libya was politically split.

There is the view that Prime Minister Aldabaiba is not too concerned with the legal niceties. No previous Libyan Prime Minister has been held to account on his spending or decision-making. If the dream scenario that elections are indeed held on 24 December, Aldabaiba will be out of office in four months. He is not too concerned by legal cover for his spending. He will leave that to his successor. If parliament does not want to approve the budget – Aldabaiba will not spend too many nights worrying over it.

Aldabaiba will continue to make policy announcements and spending announcements as he visits hospitals, regions and various institutions. If parliament releases money for projects, he can take the credit, if it does not, all of Libya know parliament failed to pass the budget.

HoR making itself even less relevant?

While Aldabaiba may get away with his win-win scenario, it is unclear if the same applies to the HoR. If Aldabaiba underscores that the unified Libyan government can continue operating without parliament approving its proposed budget, it begs the question: what is the use of the HoR?

If the HoR reinforces this perception, it will make itself seem even more irrelevant to the average Libyan than it is already perceived.

The dynamic between the HoR also underlines the problem of the respect of the clear division of power between Libya’s executive and legislature. Former prime minister Ali Zeidan had spoken previously on how parliamentarians were in ever constant contact with him during his term in office trying to influence his executive decisions.

The HoR has a habit of wanting to influence details of Aldabaiba’s decisions. Individual members and those aligned to cities, regions and Hafter – are always seeking to extract political and monetary decisions for their area or political stream – at the expense of the greater national good. They have no qualms about stopping a national budget if there is nothing in it for them.

The dynamic is problematic and is holding back Libya’s progress to further economic and political development – least of all on the road to the planned elections.

HoR: No sessions to debate 2021 budget this week, government summoned for questioning on 30 August | (libyaherald.com)