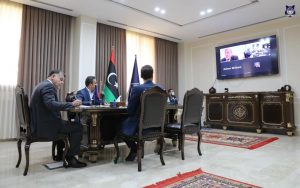 Libya’s Minister of Interior, Khaled Mazen, discussed yesterday with U.S. Ambassador and Special Envoy to Libya, Richard Norland, the plans and programmes carried out by the Ministry to secure the upcoming 24 December 2021 elections, and aspects of cooperation between the two countries, especially in the security aspect.

During the virtual meeting, the Minister confirmed that the ministry had prepared nearly 35,000 members of the police to secure the elections and had prepared training courses to raise their efficiency in the field of electoral security.

The Minister also touched on the issue of illegal immigration and the resulting economic burdens and made it clear that the Libyan state did not hesitate to provide aid to migrants as it is a humanitarian issue, explaining that Libya is not the only side affected by this phenomenon, indicating the willingness of the Libyan side to cooperate in this file.

For his part, the Ministry reported, the American Ambassador expressed his country’s readiness to cooperate with the Ministry of Interior and reactivate the previously signed agreements between the two countries, which are concerned with raising the capabilities of the ministry’s agencies and personnel. The ambassador stressed that work is continuing in many security fields.