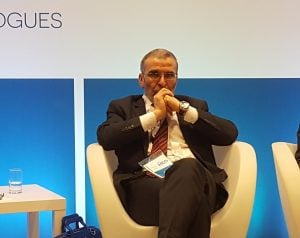 NOC chairman Mustafa Sanalla has been suspended from his post and referred for investigation by Oil Minister Mohamed Aoun (Photo: Archives by Sami Zaptia).

National Oil Corporation (NOC) chairman Mustafa Sanalla has been suspended by Oil Minister Mohamed Aoun. He has also referred him for administrative investigation.

Sanalla had broken a government rule that all leading government employees must seek permission before travelling abroad. Sanalla ignored the rule.

Sanalla has also been referred for investigation for refusing to allow his temporary successor to take over his post and for running the NOC whilst he was abroad.

NOC Board member Jadalla Oakely had been appointed by Oil Minister Aoun as Sanalla’s temporary replacement until further notice.

Aoun also informed the head of the Petroleum Facilities Guard (PFG) of Sanalla’s suspension as of 28 August.

Meanwhile, today, Sanalla’s replacement Oakely declined to take over as the temporary replacement.