Militia clashes evidence their corruption and unaccountability to state institutions 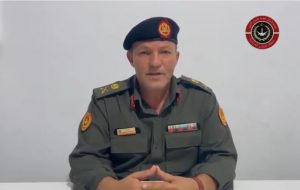 In a video address, the commander of the Tripoli Military Region, Major General Abdel Basset Marwan, yesterday described the armed clashes that took place in Tripoli Thursday night/early Friday morning as “an attempt to correct the course of the 444th Fighting Brigade.”

He said they had nothing to do with Tripoli-based militias clashing but were an attempt by the state to reimpose its will on the 444th brigade.

He said that the 444th Brigade had deviated recently with its non-compliance with military orders, and its attendance at meetings that it were not authorized, and that the Brigade now includes people who were not official members of the brigade.

He added that there is no independent financial existence for the 444th Brigade as it was part of the Tripoli Military Region, and that they had been surprised to discovered that a bank account for the Brigade had been opened, without their knowledge, and a deposit of ten million dinars was made into it. He said they had communicated to the bank about but that the money had already been withdrawn.

Marwan confirmed that Lieutenant-Colonel Mahmoud Hamza, the Commander of the 444th had obtained permission to travel to Turkey on Thursday, without the knowledge of the region’s commander, and that he had already travelled to Turkey.

It is for these reasons that Marwan said they forced their entry into the Tikbali barracks to secure the armaments in it. He said he accepts all responsibility at what happened and called for the Supreme Commander to open an investigation into the incident.